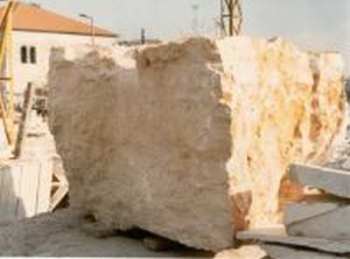 The holy cornerstone for the Third Temple will be transported by the Temple Mount and Land of Israel Faithful Movement as they march on Jerusalem Day, 27 Iyar 5769 (May 21, 2009). It will be driven from Ammunition Hill to the Jaffa Gate, along the western walls of the Old City to the downtown streets of Jerusalem. There it will be presented to the people of Israel and to the entire world for the first time since the destruction of the Holy Temple in 70 CE.

Since 1967, Jerusalem Day has become one of the most important holidays in Israel. This public holiday commemorates the liberation of the Temple Mount, the biblical city of Jerusalem, the City of David and the biblically significant areas of Judea, Samaria, Gaza, the Golan Heights and the Sinai Peninsula. All of this happened in the Six Day War of 1967. It was then that God returned the Temple Mount in Jerusalem to His People Israel so that they would immediately rebuild His Holy Temple in order to renew biblical worship there.

The Jerusalem Day march of the Temple Mount Faithful will begin at Ammunition Hill, located in northern Jerusalem. This was the site of some of the most heroic action during the Six Day War. Intense fighting took place from bunker to bunker. Israeli soldiers sacrificed their lives in battle for the God of Israel, for the Holy City of Jerusalem and for the Temple Mount. Ammunition Hill became the symbol of both Israeli heroism and the fighting together of God and His people Israel in fulfillment of His prophetic Word.

The marchers will be led by a truck carrying the holy cornerstone for the Third Temple. The cornerstone, weighing 13 tons, will be carried on the back of the truck, underneath a chuppah, and decorated with Israeli flags, the Star of David and Temple flags. Silver trumpets reconstructed for future worship in the Third Temple will be blown throughout the march.

On the way to the Temple Mount, the marchers will stop in front of the United States Consulate. Here they will present whatever the God of Israel puts onto their hearts as a stance against the growing pressure from US President Barack Obama. They will warn him about his desire to divide the Land of Israel in order to establish a foreign, terror-filled Arab state inside the sovereign Land of Israel. (This land was given by God to the Jewish people alone in an eternal covenant.) The marchers will also warn him concerning his pressure to stop Jewish settlement of the Land and to remove the settlements in Judea and Samaria. They will call out to President Obama: "Take your hands off the Land of the God and the people of Israel!" They will warn him of the divine judgment from God as prophesied by the Prophet Joel:

"For behold, in those days, and in that time, when I shall bring back the captivity of Judah and Jerusalem, I will also gather all nations, and will bring them down in the valley of Jehosophat, and will enter into judgment with them there for my people and for my heritage Israel, whom they have scattered among the nations, and have divided up my land" (Joel 4:2).

When the marchers arrive at the Jaffa Gate in Jerusalem, they will blow the silver trumpets and swear their faithfulness to Jerusalem while dancing with the flags. They will then continue through the Old City and ascend to the Holy Temple Mount. There they will swear their faithfulness and devotion to the Godly anointing on the Faithful Movement to build the third Temple of God in our lifetime.

When the marchers arrive at the Jaffa Gate in the Old City, the holy cornerstone will continue to the downtown streets of Jerusalem, where it will be presented to the people of Israel and to the entire world. This great occasion will be one of the most exciting events that Israel has experienced during this special end time age.

Everyone is invited to participate in this exciting, historic and Godly event. Everyone is called to actively join, come and stand together, and help the Temple Mount and Land of Israel Faithful Movement complete her major and historic campaign to build the Temple of God and to bring to pass all of God's end time prophetic plans for Israel and the entire world.