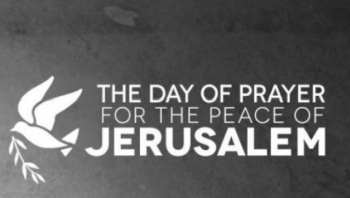 Several Christian groups are sponsoring an "International Day of Prayer for the Peace of Jerusalem" on Sunday, October 1, 2006. The leaders of this event include Robert Stearns, Jack Hayford, Malcolm Hedding, Wayne Hilsden, and Rebecca Brimmer. According to the press release, "members will be stationed in various nations and regions of the world, including Jerusalem, Germany, Brazil, New York, and Indiana."

First, let me say that I have no problem with praying for Jerusalem. King David speaks of doing that very thing:

Jerusalem is the place where God said He will dwell forever:

"He said to me, 'Son of man, this is the place of My throne and the place of the soles of My feet, where I will dwell among the sons of Israel forever....'" (Ezekiel 43:7)

The problem with an "International Day of Prayer for the Peace of Jerusalem" is that it focuses on one day of the year. Why is that? It makes people think that they have done there job so there is no need to do more. We should be doing this everyday, without ceasing. We don't have to make a big deal out of it, just do it.

For reasons I'll probably never understand, Christian leaders seem to think it's necessary to make a big deal out of everything. There has to be a day for everything, and an event that goes along with it. Why? Is it important to parade their deeds before the nations, so that all may see?

There's nothing wrong with interceding for Israel and praying for Jerusalem but we don't need to reserve it for special days. Just do it everyday. Don't make a big deal out of it.