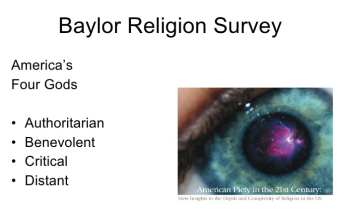 According to a recent survey, people in the United States who believe in God are, evidently, not in agreement which God it is. The survey was written and analyzed by sociologists from Baylor University's Institute for Studies of Religion in Waco, Texas, and conducted by Gallup. The survey [available in PDF format] asked 1,721 people 77 questions with nearly 400 answer choices that burrowed deeply into beliefs, practices and religious ties. It is considered to be by far the most comprehensive national religion survey to date. (A more in-depth analysis can be found on Amazon.com.)

Though 91.8 percent of the people say they believed in God, a higher power, or a cosmic force, they had four distinct views of God. These four 'Gods' — dubbed by researchers Authoritarian, Benevolent, Critical or Distant — tell more about people's social, moral, and political views and personal piety than the familiar categories of Protestant, Catholic, Jew, or Democrat/Republican.

An excellent example of the problems that can arise from using just the word "god" is in the Declaration of Independence of the United States. Because it uses the universal term "god", many Christians have come to automatically assume that it means the God of the Bible, and thereby declare the United States a "Christian nation". However, given that many of the signers of the Declaration of Independence and the Constitution (including the ones who wrote them) were Deists, as were many other outspoken leaders and participators in the Revolutionary War, this is not necessarily true. [Taken from "Who Is Your God and What Is His Name?"]

According to the report, "Americans may agree that God exists. They do not agree about what God is like, what God wants for the world, or how God feels about politics. Most Americans pray. They differ widely on to whom they pray, what they pray about, and whether or not they say grace. A vast majority of Americans are Christians, but attitudes amongst those Christians regarding the salvation of others, the role of religion in government, the reality of the paranormal, and their consumption of media are surprisingly diverse."

When men seek Yahweh with a pure heart, without "benefit" of the clergy or "religious leaders" with hidden agendas — it is possible to know the one true God, the God of Abraham, Isaac, and Jacob. (That doesn't mean we have all the answers but we can be a bit more unified on who God is.) Yahweh said, "You will seek Me and find Me when you search for Me with all your heart" (Jeremiah 29:13). Notice that Yahweh says He is able to be found when we search with all our heart. If we are seeking earthly treasures, or seeking God for our own benefit, He will not be found. But, when we seek Him with all our heart — when we lay down our lives, when we cast off the things of this world — He will allow Himself to be found. He will reveal Himself. Israel cried out for many years when they were in bondage. It wasn't until they cried out to Yahweh and realized He was their only hope; when they realized they would have to give up everything they had, then Yahweh revealed Himself to them.

There are many today who are doing just that: crying out to God to truly know Him, the one true God. They are tired of the Sunday school god, the god of the Institutional Church, the god of religion — any religion. They don't want to hear about the plans for another new building, or how to increase attendance, or how big their television audience really is. They don't want to hear from God through another man; they want to hear Him themselves. And they are! Yahweh is revealing Himself in awesome ways. He's doing it through those who are seeking Him with all their heart.

Many of us didn't even know how to call upon Him, but He says through Isaiah: "I permitted Myself to be sought by those who did not ask for Me; I permitted Myself to be found by those who did not seek Me. I said, 'Here am I, here am I,' to a nation which did not call on My name" (Isaiah 65:1). How beautiful! And now, we must seek Him with all of our heart. Seek now the one true God — Yahweh, the God of Abraham, Isaac, and Jacob.