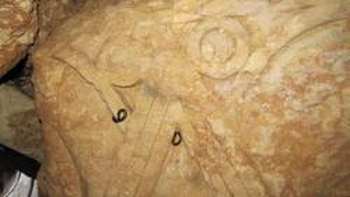 The pillar is of a type associated with monumental construction during the time of the First Temple in Jerusalem (Courtesy of Binyamin Tropper/Kfar Etzion Field School)
A mysterious First Temple-era archaeological find under a Palestinian [sic] orchard near Bethlehem is increasingly gaining attention — despite attempts to keep it quiet.

In February, a tour guide leading a group through an underground tunnel in the rural West Bank [sic], not far from Jerusalem, was surprised to stumble upon the remains of a unique carved pillar.

The pillar matched monumental construction from the 9th or 8th centuries bce — the time of the First Temple in Jerusalem. That signaled the presence of an important and previously unknown structure from that period.

Buried under earth and rubble, the pillar was now two yards below the surface.

The guide, Binyamin Tropper, notified antiquities officials. He was surprised when they encouraged him to leave the subject and the site alone, said Tropper, who works at an educational field school at Kibbutz Kfar Etzion.

The remains are in the politically charged West Bank, on the outskirts of an Arab village and on land privately owned by a Palestinian — all reasons the Israeli government might deem attempting an excavation there a major political headache to be avoided.

When it became clear that antiquities officials did not intend to excavate what he believed to be a potentially huge find, Tropper went to the Hebrew press, where several reports have appeared on inside pages in recent weeks.

Tropper has kept the location secret to avoid attracting the attention of antiquities thieves.

Early this month, several prominent Israeli archaeologists were brought to inspect the site. Among them was Yosef Garfinkel, an archaeology professor from Hebrew University.

There is no doubt the remains are those of monumental construction from the time of the First Temple, Garfinkel said.

The top of the pillar, known as a capital, is of a type known as proto-aeolic, he said. That style dates to around 2,800 years ago.

The pillar marks the entrance to a carved water tunnel reaching 250 yards underground, he said, complex construction that would almost certainly have been carried out by a central government. At the time, the area was ruled by Judean kings in nearby Jerusalem.

In its scale and workmanship, Garfinkel said, the tunnel evokes another grand water project of First Temple times — the Siloam Tunnel in Jerusalem, now underneath the modern-day Arab neighborhood of Silwan. That project is believed to have been undertaken by the biblical king Hezekiah to channel water into the city ahead of an Assyrian siege in the 8th century bce, according to an account in the biblical Book of Kings.

The existence of a large water tunnel at the new site suggests the presence nearby of a large farm or palace, Garfinkel said.

"The construction is first-rate," he said. "There is definitely something important there from biblical times, the 9th or 8th centuries bce."

Archaeology in the Holy Land has long been caught up in modern-day politics. The Zionist movement always viewed unearthing remnants of the ancient past as a way of proving the depth of Jewish roots in the land. Palestinians, for their part, have increasingly taken to denying the existence of any ancient Jewish history and tend to condemn all archaeology conducted by Israel as an attempt to cement political control.

Palestinians would thus be unlikely to be sympathetic to the discovery of a new site of significance to Israel on land they claim for a future state.

Tropper, the guide, said he hoped interest from professional archaeologists would prod the government to conduct an excavation. The site could be a source of income for the Palestinian owners and the nearby village, he suggested.

The Israel Antiquities Authority has been careful in its public responses to reports of the new finding, but did not rule out an excavation.

"This is indeed an important find, which preliminary information dates to the time of the kings of Judah," the authority said in a statement Sunday.

"At the same time, it should be known that the subject is sensitive and requires treatment that is delicate and responsible. The Antiquities Authority, along with all other relevant authorities, has been dealing with this for some time in an attempt to bring about the complete excavation of the remains, and will continue its attempts to do so."