Israel Will Be Just Fine 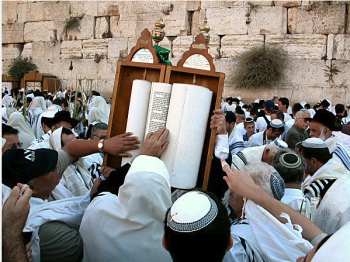 It sure seems as if a lot of people these days are willing to write off Israel if the United States government backs off from its support. They seem to think that, without the backing of the United States, Israel doesn't have a chance of surviving, even with Yahweh's help. But, is that really true? Is Israel doomed now that the 'evil Democrats' have taken over the US government and cast out the corrupt Republicans?

Well, I don't really care too much for the smut of politics, so I won't go into the travesties that have been accomplished by both Democrats and Republicans. (Yahweh, by the way, is neither Republican nor Democrat.) So, let's take a look at the words spoken by the only One that we can trust — the God of Abraham, Isaac, and Jacob. What does Yahweh have to say about Israel, whom He chose to be His people forever?

"Thus says the Lord, who gives the sun for light by day and the fixed order of the moon and the stars for light by night, who stirs up the sea so that its waves roar; the Lord of hosts is His name: 'If this fixed order departs from before Me,' declares the Lord, 'then the offspring of Israel also will cease from being a nation before Me forever.' Thus says the Lord, 'If the heavens above can be measured and the foundations of the earth searched out below, then I will also cast off all the offspring of Israel for all that they have done,' declares the Lord." (Jeremiah 31.35-37)

"Hear the word of the Lord, O nations, and declare in the coastlands afar off, and say, 'He who scattered Israel will gather him and keep him as a shepherd keeps his flock.'" (Jeremiah 31.10)

"'For this is like the days of Noah to Me, when I swore that the waters of Noah would not flood the earth again; so I have sworn that I will not be angry with you nor will I rebuke you. For the mountains may be removed and the hills may shake, but My lovingkindness will not be removed from you, and My covenant of peace will not be shaken,' Says the Lord who has compassion on you." (Isaiah 54.9-10)

"Then they will know that I am the Lord their God because I made them go into exile among the nations, and then gathered them again to their own land; and I will leave none of them there any longer." (Ezekiel 39.28)

"But you, Israel, My servant, Jacob whom I have chosen, descendant of Abraham My friend, you whom I have taken from the ends of the earth, and called from its remotest parts and said to you, 'You are My servant, I have chosen you and not rejected you. 'Do not fear, for I am with you; do not anxiously look about you, for I am your God. I will strengthen you, surely I will help you, surely I will uphold you with My righteous right hand.' Behold, all those who are angered at you will be shamed and dishonored; those who contend with you will be as nothing and will perish. You will seek those who quarrel with you, but will not find them, those who war with you will be as nothing and non-existent. For I am the Lord your God, who upholds your right hand, Who says to you, 'Do not fear, I will help you.'" (Isaiah 41.8-13)

"I will fix your boundary from the Red Sea to the sea of the Philistines, and from the wilderness to the River Euphrates." (Exodus 23.31)

"Do not fear, for I am with you; I will bring your offspring from the east, and gather you from the west. I will say to the north, 'Give them up!' and to the south, 'Do not hold them back.' Bring My sons from afar and My daughters from the ends of the earth." (Isaiah 43.5-6)

I could keep going on and on. Yahweh made sure that everyone would know that He has not abandoned His people Israel and He will keep them before Him forever. He also made sure it was clear that He would bring them back to the land of Israel — "from the Red Sea to the sea of the Philistines, and from the wilderness to the River Euphrates" — where He would reign in their midst forever:

"He said to me, 'Son of man, this is the place of My throne and the place of the soles of My feet, where I will dwell among the sons of Israel forever.'" (Ezekiel 43.7)

Israel will be just fine. But will there be times of distress and trouble? Sure, but they will only serve to cause the people of Israel to turn to the Holy One, the God of Israel, just as they did in the times of the judges when God Himself raised up enemies against them in order that they may cry out to Him (Judges 2). And, just like then, He will come to their aid, only this time it will be for good.

So, in the end, does it really matter who is in power — the Republicans, the Democrats, Iran, or Hamas/Fatah? No, not according to God. In the end, the result will be the same:

"I will gather all the nations and bring them down to the valley of Jehoshaphat. Then I will enter into judgment with them there on behalf of My people and My inheritance, Israel, whom they have scattered among the nations; and they have divided up My land." (Joel 3.2)

Should we just sit and wait for God to act? No, we are to cry out to Him, according to His word (Isaiah 62.1,6-7). As He so boldly states, "And give Him no rest until He establishes and makes Jerusalem a praise in the earth" (Isaiah 62.7). That's Jerusalem; not Washington, D.C. or Rome or any other city. It also means to stay focused.