Humanism is Destroying Us ... Literally 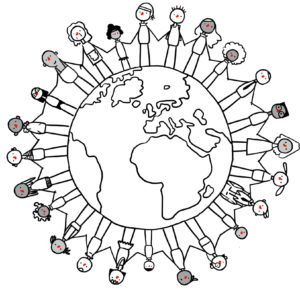 Humanism is the worst disease that has ever plagued mankind. If left untreated, it becomes malignant, ultimately killing the host. At the same time it spreads to others throughout the community, eventually destroying whole nations. It's like a silent cancer. Since the fall of Adam, humanism has caused the degeneration of the spirit of mankind. Any trace of courage or righteousness has been erased, for the most part, from all of mankind.

While I do believe that courage and righteousness still exist, it can only be seen within a small part of mankind. Unfortunately, the majority of the people in this world have succumbed to the sickness of humanism and don't even know it — they think all is well. They have become acclimated to the human decay that is happening all around, the decay known as humanism.

To understand what I mean, let's look at the basic definition of humanism:

Humanism: {noun}: 1. A system of thought that centers on humans and their values, capacities, and worth. 2. Concern with the interests, needs, and welfare of humans. [The American Heritage Dictionary, Fourth edition, 2000]

Humanism: a doctrine, attitude, or way of life centered on human interests or values; especially: a philosophy that usually rejects supernaturalism and stresses an individual's dignity and worth and capacity for self-realization through reason. [Merriam-Webster Collegiate Dictionary, 2001]

There is no room in humanism for Yahweh and His plans, even as the second definition above states, "a philosophy that usually rejects supernaturalism". It's all about each person's wants and desires. Humanism is the direct opposite of Torah. A true understanding of who man is and who God is means an understanding that Yahweh is all in all, that He alone is to be worshipped. There is no worship of money, career, rock stars, movie idols, inanimate objects, political leaders, democracy, sports figures, etc. This true understanding means that we know that man is imperfect, that he is like a flower that blossoms today and is gone with the wind tomorrow. Yahweh, however, has always been here and will always be here — He is the only constant in all of creation.

For the most part, we have the ancient Greeks to thank for humanism. They didn't bring this sickness into this world; it's a basic problem within man. It was Adam's problem in the first place. He put his own needs first, before Yahweh. The Greeks merely nourished humanism, helping it to fester and grow on a worldwide scale. Unfortunately, most people love it so much, it became the basis of the world's educational system.

Even though humanism is the disease, it's man who is responsible for its spread throughout the world. He alone is accountable. With a bit of discipline, and a proper perspective of God, the disease could easily be wiped out. Man, however, chooses to help it spread.

There are many types of humanism. They all agree, however, on one thing: man is the center of all things, he is the main focus. From that comes the focus of mankind as a whole, i.e., the society. Humanism works for the greater good of the society, while affirming the dignity and worth of all people

The idea that individual beliefs and values must be compromised in order to live in peace with others is a reoccurring theme in humanism that has grown rapidly in the last few decades. Rather than stand for what they know is right, people make compromises because they or their families might be at risk to some real or imagined danger. So, instead of taking a stand and paying the consequences, it is deemed acceptable to compromise on your beliefs and play it safe. That, by the way, is actually an excellent definition of a coward — not standing up for what you believe in.

People who claim to be righteous compromise with the society around them in order for them or their children to fit in. They don't want to be ostracized; they want everyone to accept them.

Humanism is more commonly known as "tolerance". This is practiced by people who, while professing to believe in Yahweh, have no problem praying with others who serve a god whose stated goal is the destruction of the people of Yahweh in order that all people might attain to some false worldwide peace. It's tolerance that says in order to have peace with our neighbors we will gladly give up land that Yahweh declared is His and gave to us for an inheritance. It's tolerance that is practiced by those who would encourage someone to do something they know is unrighteous as long as it results in goodwill for everybody. It's tolerance that says yes, this man murdered my child but I will forgive him because his parents abused him.

Truth no longer means anything. In fact, truth has been accepted as being relative to each person or each society. Most people no longer believe in anything. Upon seeing the moral decay of man in today's world, most people don't expect too much from others, and they usually aren't disappointed.

But take a look at the Maccabees. One man, Mattathias, who loved Yahweh more than his own life, had had enough. He rose up and killed those who had blasphemed Yahweh. He stood for what he believed in; he was willing to die for a cause — for the cause of Yahweh. Mattathias encouraged others who loved Yahweh to follow him. When it was over, a small, unorganized band of men who fought for what they believed in defeated the greatest army in the world. Yes, it was with the help of Yahweh, but they needed to believe first. They needed to be strong, they needed to have faith that Yahweh would strengthen them and lead them. They needed to be willing to die for Yahweh, for what they believed in.

Phinehas is another excellent example. The Torah states:

"While Israel was staying at Shittim, the people profaned themselves by whoring with the Moabite women, who invited the people to the sacrifices for their god. The people partook of them and worshiped that god. Thus Israel attached itself to Ba'al-peor, and Yahweh was incensed with Israel. Yahweh said to Moses, 'Take all the heads of the people and have them publicly impaled before Yahweh, so that Yahweh's wrath may turn away from Israel.' So Moses said to Israel's officials, 'Each of you slay those of his men who attached themselves to Ba'al-peor.' Just then one of the Israelites came and brought a Midianite woman over to his companions, in the sight of Moses and of the whole Israelite community who were weeping at the entrance of the Tent of Meeting. When Phinehas, son of Eleazar son of Aaron the priest, saw this, he left the assembly and, taking a spear in his hand, he followed the Israelite into the chamber and stabbed both of them, the Israelite and the woman, through the belly. Then the plague against the Israelites was checked. Those who died of the plague numbered twenty-four thousand. Yahweh spoke to Moses, saying, 'Phinehas, son of Eleazar son of Aaron the priest, has turned back My wrath from the Israelites by displaying among them his passion for Me, so that I did not wipe out the Israelite people in My passion. Say, therefore, "I grant him My pact of friendship. It shall be for him and his descendants after him a pact of priesthood for all time, because he took impassioned action for his God, thus making expiation for the Israelites."'" (Numbers 25:1-13)

Now, I am sure that 95% of all the people of the world today — including many followers of Yahweh — would consider what Phinehas did a bit extreme, if not downright murderous. They would never condone that type of action today. Yet Yahweh granted Phinehas a "pact of friendship". How awesome! Yahweh said that Phinehas had a passion for God, so how can what Phinehas did be wrong? Yes, I have heard the statements that it was another time, and that today we are "civilized" (whatever that means). Well, if that is the case, then I guess being "civilized" means not having a passion for God. No, I believe, and Torah teaches, that what Phinehas did was a very righteous act, and God supported it! And He would support it being done today, in the same situation! There is no evidence in the entire Tanach that says anything different.

The problem many people have is that they confuse morals with the commandments of Yahweh. In many instances, these are two entirely different things. You see, morals are what a given society considers as being right, which change from one society to another and from time to time. For instance, in some societies today killing your unmarried sister for having sexual relations with a man is considered moral, whereas in other societies it is not. In some societies taking the life of an unborn child is considered acceptable (moral), whereas in other societies it is considered murder. To say that certain things applied during "biblical times" and not now is ludicrous. First of all, Yahweh is not yet reigning in Jerusalem so "biblical times" still exist today. Second, Yahweh has said that His Torah (instructions) are eternal. That does not change with what man considers to be moral; instead, it remains the same throughout all eternity.

Is biblical faith not applicable today? Is it wrong to have a passion for God? Are we more worried about "acting civilized" or "being accepted" than we are about fighting for God? Now, let's not be foolish. I'm not saying to go around killing people. I am saying to stand for what you believe in, without compromise, no matter what the cost.

Abraham picked up and moved his family and all of his possessions because he believed God. Today, most people would call someone who did something like that an "extremist" — Yahweh called him His friend. The prophets were stoned and jailed for speaking what Yahweh had told them. Once again, people today would call someone like that an "extremist". Yahweh, however, says that they have a passion for Him.