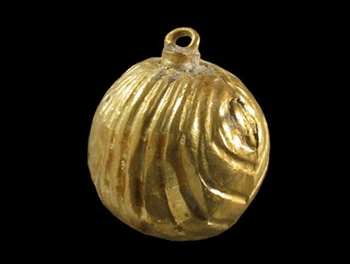 Golden bell from priest's robe (Jewish Virtual Library)
For almost two thousand years the Land of Israel waited for the return of her Israelite sons and daughters to the Promised Land. Buried safely beneath the ground, the G-d of Israel protected the exciting biblical past of His people Israel — to be rediscovered by His Israeli children precisely during this prophetic redemptive end-time era so that they can restore the historical biblical chain and reconnect it with the link that was cut by the enemies of Israel when they destroyed the Kingdom of Israel nearly two millennium ago.

The intention of the G-d of Israel — through this godly plan which is happening now during the prophetic time of redemption that Israel is currently experiencing — is for the ancient links to be connected to the new links that the G-d and People of Israel are presently constructing in the Land of Israel. The most exciting discoveries are the archaeological biblical finds that are connected to the Holy Temple in Jerusalem and specifically to the sacred temple worship performed by the Hebrew priests inside the Holy Temple, in addition to the biblical artifacts being found in the City of David that lies just south of the Holy Temple Mount.

Many of these biblical archaeological discoveries were found by the Israeli archaeologists after the redemptive Six Days War and especially in the last few years and each day there are more and more unearthed. All of these, I feel deep in my heart, are clear messages from the G-d of Israel to His People Israel to rebuild His Holy Temple with no delay on the Holy Temple Mount in Jerusalem, on the place that He pointed to King David to build His Holy House, and to renew the days of Israel as in the biblical times and to continue a prophetic chain as was prophesied by the G-d of Israel in His end-time prophesies.

Like the historic golden bell of the High Priest and the temple seal, which prove to Jewish claims to the holy Temple Mount, Jerusalem and the Land of Israel, a stamp with the Temple Menorah engraved on it was discovered in the Land of Israel near Akko.

Recently, just two weeks after the Temple Seal was discovered and displayed to the public, archaeologists continued to dig up breathtaking proofs of the ancient and never-severed connection between the Jewish People and the Holy Temple Mount, Jerusalem, and the Land of Israel. This time the find was a 1,500 year old tiny stamp discovered near the city of Akko, in northern Israel, bearing the image of the seven-branched Temple Menorah.

The stamp was used to identify baked products and probably belonged to a Jewish bakery that supplied kosher bread to the Jews living in Akko. The ceramic stamp belongs to a group of stamps referred to as "bread stamps" because they were generally used to stamp kosher baked goods. The Temple Menorah, being a Jewish symbol par excellence, indicates the stamp belonged to Jews. This is the first time such a stamp was discovered in a controlled archaeological excavation.

This dramatic find from 1,500 years ago, and other finds that were discovered in the past years all over the Land of Israel, indicate what is very well known in the history of the Land of Israel: Jewish life never stopped in the Land of Israel after the destruction of the Holy Temple and the Israelite Kingdom in the year 70 ce. While most of the Jewish population was exiled from the Land, other communities of Jews who survived the destruction continued to flourish in the Land without cessation throughout all the periods of foreign occupation and destruction of the Land of Israel during the past 2,000 years. The Temple Menorah symbol that the Jews used in their synagogues and in other various aspects of their lives symbolized their deep desire for the rebuilding of the Holy Temple of the G-d of Israel in Jerusalem and for the redemption of all the Land of Israel. It is not an accident that the Temple Menorah has been the symbol of the State of Israel since 1948 and it appears in the Knesset, in the government offices, in the Presidential Residence, in all the courts of the State, and on all of the official writings and papers of the State of Israel.