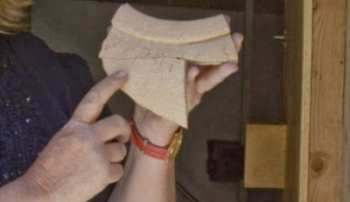 Inscription on shard found in Ophel area [Credit: Oriah Tadmor]
A possible decryption of the oldest inscription ever found at an archaeological site in Jerusalem has interesting implications. If correct, the decryption attests to an organized administration and system in which people were literate, and had a system for classifying wine by quality.

The inscription was found in the Ophel area, south of the Temple Mount, at an archaeological dig run by Dr. Eilat Mazar, from the Archaeological Institute at the Hebrew University of Jerusalem. (Last year Dr. Mazar also found a large cache of ancient golden treasure at the foot of Temple Mount.)

The inscription, uncovered six months ago, is etched into a remnant of what was a large clay pitcher, and is eight letters long. It is dated to the second half of the 10th century bce, the days of King Solomon.

Most scholars who have examined the inscription determined that it was written in an ancient near eastern language, and not in Hebrew.

An article recently published by Professor Gershon Galil from the department of Jewish History at Haifa University, however, suggests a new analysis of the inscription.

"Here we see the word yayin. When you check how all the languages from that period and region wrote 'wine,' you see they wrote it with one yud, — the same in Samarian northern Hebrew. The Phoenicians wrote it the same way as well. Aside from the southern Hebrew of that time, even the scrolls found in Qumran preserve the same spelling of the word," explains Galil.

Galil posits that the inscription can be divided into three parts that describe the wine stored in the pitcher. The first letter is a final mem, perhaps the end of the word for twenty or thirty — as in the twentieth or thirtieth year of the kingdom of Solomon. "Wine part" is the kind of wine, and the mem represents the place from which it was brought to Jerusalem.

"Wine part" is a term that is known from the Ugarit language from northern Syria, which is the lowest of three categories used to define wine: "good wine," "no good," and "partial."

"This wine wasn't served to Solomon's emissaries, or in the Temple, but apparently was for the slave construction workers who worked in the area," says Galil.

From other, later sources, archaeologists know that the low quality wine was given to soldiers or forced laborers. The fact that the wine was of low quality is also logical considering that it was stored in a large vessel that did not keep it very fresh.

This new theory regarding the inscription will no doubt cause a big stir among the archaeological community, regarding the periods of Kings David and Solomon. Many archaeologists claim that during biblical times Jerusalem was not a large or important city, despite the way it was described in Biblical literature.

Professor Galil and other supporters of the biblical accounts see the Bible as a historical document, and this particular interpretation of the inscription supports the existence of a complex administrative system, as well as a hierarchical society with regulated shipping from far off places. These claims support the biblical version of the story, which describes Jerusalem as a large, important city that ruled over significant kingdoms.

The inscription, according to researchers who support the biblical version of the history, supports the theory that Jerusalem expanded during King Solomon's time, from the City of David to the Temple Mount.