An Ugly Reality Only the Most Enlightened Refuse to Concede 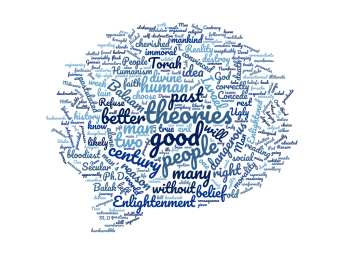 This past century, the bloodiest in all of human history, should have lain to rest two of the most cherished theories about mankind postulated by the Enlightenment and Secular Humanism.

One was the idea that all moral questions, all issues of right and wrong, good and evil, were subject to being correctly decided on the basis of man's reason alone, without the necessity (better put, without the interference) of divine revelation or organized religion. Man, and man alone, would be the final and autonomous arbiter of morality.

This idea brought with it, as a necessary corollary, the firm belief that man left to his own reasoning devices would invariably choose to do what is right, what promotes life and fairness and the common good.

This second idea of man's innate choice of goodness was aided and abetted by an arrogant belief that an educated person was more likely to do good than an illiterate one — that a Ph.D. graduate would be less likely to kill, harm, maim, and destroy than a poor, hardscrabble, backwards farmer.

But none of these theories have proven true. Hitler, Stalin, Mao, Pol Pot, Milosevic and the entire slew of other murderers of the 20th century have all given the lie to these fantasies about human morality and rectitude. One-third of all of the commandants of the Nazi death camps held either a Ph.D. or M.D. degree. Man, left to his own reason, will not choose right. Reason, by itself, is death and destruction, oppressive theories and murderous social engineering. No faith and no belief have led us to the brink of the social abyss of self-destruction.

Our society hungers for a return to self, to a system of eternal values, to a disciplined life-style and to the true liberty of faith, which will free us from the ills of mindless conformity.

Balak and Balaam, the two main characters in one of the Torah reading of this week [Numbers 22] are powerful, respected, intelligent people. Balaam even possesses the gift of divine intuition and prophecy. But they are base, evil, and immoral people. They are so convinced of their own powers, of their own ability to reason correctly, that they are convinced that they can hoodwink the Divine and destroy the Jewish people, all without consequence to themselves.

They exhibit all of the immoral traits of the dark side of human behavior — greed, corruption, jealousy, foul speech and causeless hatred. But their worst trait is arrogance — they know better, they are better, they deserve better. And the People of Israel, and through it, the God of Israel and His divine Torah, apparently stands in their way. So, denying God and destroying the People of Israel will somehow improve the world.

We have seen the genocidal plan of Balak and Balaam take on the flesh of reality in this past century as well. We now know how dangerous such people are.

But many, and especially, inexplicably many Jews, are loath to relinquish the good old theories of the Enlightenment. And that is a truly sad and dangerous error. Jewry needs a healthy dose of realism and should forsake many of the utopian, naive and dangerous beliefs and theories that have characterized our journey in the modern world over the past two centuries.

This past century, the bloodiest in all of human history, should have lain to rest two of the most cherished theories about mankind postulated by the Enlightenment and Secular Humanism.