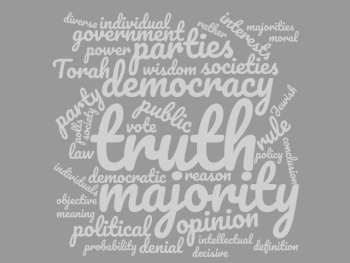 The pluralism of which democracies boast is another indication of their lack of truth-orientation. For this pluralism extends to the question of how should man live, and who does not know that democracies tolerate virtually every kind of "life-style"? Thus homosexuality has become as respectable as heterosexuality, and cheating has become a commonplace in high schools and colleges.

Democracies reduce truth to a private possession. Each individual becomes his own source of truth regarding good and bad, right and wrong, just and unjust. This is why public opinion polls have become the standard for public policy. In other words, opinion polls are required in democratic societies because in such societies each man's opinion is deemed as valid as the next. This equality of opinion, manifested in the principle of "one adult, one vote," is logically related to the denial of objective truth, the denial of objective standards as to how man should live or how society should be governed.

What takes the place of truth in democratic societies is "opinion." Going deeper, diverse opinions are little or nothing more than expressions of the material interests of different groups and individuals. Therein is the motivation of political parties.

Political scientists define political parties as organized groups competing for political power, the power to control the institutions of government and thus to determine government policy. The only reason why democracies field a multiplicity of competing political parties is because no one party has a monopoly of power. Democrats who preach toleration do so because they themselves want to be tolerated, that is, to live more or less as they please. The phantasmagoria of parties in Israel, magnified by making the country a single electoral district in which these parties compete for Knesset seats via proportional representation, testifies to the absence of truth.

A party, by definition, represents only a partial view of things, even though party spokesmen parade their interests in the name of the "public interest" or the "common good." But that parties are power-oriented rather than truth-oriented is evident from their oligarchic structure. Notice how difficult it is to change party leaders (despite primary elections).

I could have said at the outset that democracies by definition cannot be truth-oriented if only because the very term "democracy" means the rule of the people, which means the rule of shifting majorities very much influenced by the media—whose mandarins are not famous for their commitment to truth. What rules in democracies is [not] reason but the will—the will of mutable majorities.

Although majority rule is an important Torah principle (see Exodus 23:2 and Babylonian Talmud, Sanhedrin 3b), its operation is limited by higher principles, such as the Ten Commandments. What is more, in Jewish law the meaning of majority rule is rational rather than volitional. But let us examine the relevant Hebrew concept.

As noted in my book Judaic Man, although the Hebrew word rov can be translated literally as "majority," the term "probability" most often conveys its operational meaning. As a matter of fact, in Torah jurisprudence, the majority principle is a subset of the probability principle. What is decisive is not the will of the majority so much as the judgment of the majority. It is the judgment of the majority, reached by thorough examination of diverse evidence, that carries moral authority, for it is more likely to be in accord with truth on matters of law. And because truth is the aim, there are numerous cases in Jewish law when the conclusion of an outstanding individual jurist or scholar was accepted against the rest of his colleagues.

Stated another way: If the truth or falsity of some theory concerning subatomic processes were to be decided by the vote of a scientific convention, the outcome would obviously depend not on the will but on the reasoning of the majority. In a democracy, however, what is decisive is not reason or truth but the will or "rights" (read: interests) of the majority, which is why decisions are made on the basis of "one adult, one vote" regardless of the intellectual caliber of those voting.

A democracy would cease to be a democracy if the majority were to recognize and defer to the wisdom of some outstanding individual. Deference to wisdom will be found only in a Torah community. This cannot be said of any regime dominated by politics where individuals of mediocre, not to say contemptible, character put themselves forward as candidates for the highest public office.

In conclusion, consider Winston Churchill's celebrated remark that democracy may not be the best form of government, but all others are worse. What does this really mean? It means that men of wisdom and virtue are so few in number in any existing society that of all forms of government, democracy is not as bad as the rest. Of course, Churchill was speaking of the non-Torah world, a world not dedicated to truth. Jews who identify the Torah with democracy are therefore either ignoramuses or dissemblers. It's time to make intellectual and moral distinctions-time to tell the truth.

Unsurprisingly, the pollsters predict that Barack Obama will win the presidential election. Many attribute this primarily to his uncritical and adoring leftwing media and his unprecedented $600 million campaign expenditures. I think they miss the most significant factor. A very large percentage of the American people are not interested in truth and falsity—otherwise, Obama, an Orwellian windbag, would not even have become a candidate. No, what so many Americans want is entertainment—show-biz—and this, more than any other factor, has enabled Obama to attract if not mesmerize the drones who will be voting for him today.