The Demise Of Israel? 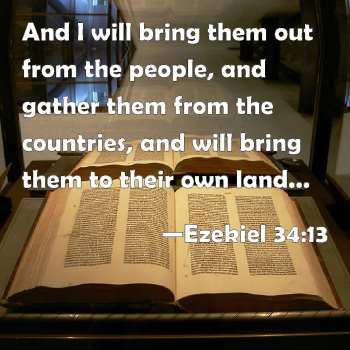 It seems that ever since the presentation of the so-called "Road Map" many people are predicting the demise of the State of Israel. While this would certainly be true for any other nation, it's not the case for Israel. There is one thing that will make sure that does not happen.

Israel's beginnings stretch back 4,000 years to Abraham, through Isaac, Jacob, and finally, the nation of Israel itself. By a tremendous judgment upon Egypt, God delivered Israel from bondage and brought them into the land of Canaan. Since that time, for over 3,500 years, there has always been a Jewish presence in the Land of Israel. The Land flourished with the Jewish people in its midst. It was abundant with all forms of life. When God drove Israel out into the nations the Land became barren and deserted. No nation was ever able to bring life to the Land; no nation ever desired the Land as did the Jewish people. In fact, the Land of Israel was never important to any nation except when the Jewish people began to return in the late 1800's. (See Leviticus 26.35)

Since that time the Land has flourished and blossomed. The deserts are alive with beautiful plants and trees and animals. The mountains of Judea and Samaria literally shout with joy. The Golan glistens in the afternoon sun. The Land of Israel responds only to the people of Israel. It's an eternal covenant. One cannot live without the other. For centuries the Land waited for its rightful owners, laying barren, looking to the day that God would bring His people home as He foretold through His prophets.

Many nations and people have also tried to destroy Israel since their return. Today there are many who want Israel to give up its land, even many who live in Israel. Many are predicting that, by giving up this Land, it will mean the end of the nation of Israel. Yet, this could not be further from the truth. God foretold of the regathering of His people to the Land where they would live forever. The Scriptures are full of these prophecies. They are being fulfilled on a daily basis right before our eyes.

The faithful in Israel are standing bolder each day. They are not looking to the Quartet [[United States, European Union, United Nations, and Russia] for their redemption. It is the God of Israel they fear more than the nations of the world. This is the one thing that will make sure that the nation of Israel will continue to exist in the Land of Israel — the Word of the Holy One of Israel.

"As long as deep in the heart, the soul of a Jew yearns, and towards the east, an eye looks to Zion, our hope is not yet lost. The hope of two thousand years, to be a free people in our Land, the Land of Zion and Jerusalem." Hatikvah (The Hope)

"Thus says the Lord, who gives the sun for light by day, and the fixed order of the moon and the stars for light by night, who stirs up the sea so that its waves roar; The Lord of hosts is His name: 'If this fixed order departs from before Me,' declares the Lord, 'then the offspring of Israel also shall cease from being a nation before Me forever.' Thus says the Lord, 'If the heavens above can be measured, and the foundations of the earth searched out below, then I will also cast off all the offspring of Israel for all that they have done,' declares the Lord." (Jeremiah 31:35-37)