The Altar of Joshua on Har Eval 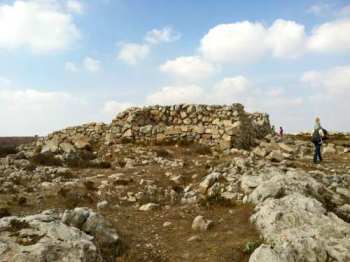 The altar of Joshua on Har Eval
"Moses and the elders of Israel charged the people, saying: Observe all the instruction that I enjoin upon you this day. As soon as you have crossed the Jordan into the land that Yahweh your God is giving you, you shall set up large stones. Coat them with plaster and inscribe upon them all the words of this teaching. When you cross over to enter the land that Yahweh your God is giving you, a land flowing with milk and honey, as Yahweh, the God of your fathers, promised you — upon crossing the Jordan, you shall set up these stones, about which I charge you this day, on Mount Eval, and coat them with plaster. There, too, you shall build an altar to Yahweh your God, an altar of stones. Do not wield an iron tool over them; you must build the altar of the Lord your God of whole stones. You shall offer on it burnt offerings to Yahweh your God, and you shall sacrifice there offerings of well-being and eat them, rejoicing before Yahweh your God. And on those stones you shall inscribe every word of this teaching most distinctly." (Deuteronomy 27.1-8)

"At that time Joshua built an altar to Yahweh, the God of Israel, on Mount Ebal, as Moses, the servant of Yahweh, had commanded the Israelites — as is written in the Book of the Teaching of Moses — an altar of unhewn stone upon which no iron had been wielded. They offered on it burnt offerings to Yahweh, and brought sacrifices of well-being. And there, on the stones, he inscribed a copy of the Teaching that Moses had written for the Israelites." (Joshua 8.30-32)

The amazing discovery of the Altar built by Joshua 3,400 years ago on Har Eval is more proof of the great historic connection that the Jewish people have with the Land of Israel and the great truthfulness of all the things that are written. [Video production by Ezra Ridgley. The Jewish Heritage Project]

They are Stealing Our History and We Shut our Eyes

When you speak with historical researcher, scout, and tour guide Dvir Raviv about Jewish historical findings in Judea and Samaria, it seems that if you move any random rock in Samaria, he will see that it has been moved on his next tour. It seems Dvir knows every corner and every path, every site that has been excavated as well as those yet to be excavated.

When he shows us a few examples from the sea of historical findings discovered in digs in Judea and Samaria, it is clear why the area is considered the birthplace of the Jewish People. There is no need to speak too much about Hebron and Jericho. The living historical connection makes every Jewish visitor cling to his national past but besides the obvious places, there are many others. As he begins speaking Raviv divides the findings from Judea and Samaria into three groups associated with three types of sites where significant findings have been discovered. "One type are the biblical sites, another type are sites from the period of the second Temple and the rebellion of Bar Kochba, and the third type are later sites from the Byzantine period. The significant and seminal biblical sites that were excavated and exposed very well are Nablus [Shechem], Bet El, and Hebron. Findings of the Second Temple and the Bar Kochba Rebellion focus mainly on coins, which bear very interesting inscriptions. The later sites are from the Byzantine era and synagogues have been found in those."

Raviv begins the list of biblical findings with the greatest, and perhaps most famous, of all findings — if, for the moment, we skip over the Cave of the Patriarchs — Joshua's altar on Mount Eval, the exciting find that Prof. Adam Zartal discovered in his excavations. "The altar in Mount Eval is the find and discovery. This is a very, very ancient discovery from the biblical archaeological point of view and it is almost identical to what is described in the Bible and this is what makes it a very tangible and exciting thing," says Raviv, explaining the uniqueness of the place.

"It is a ritual site at Mount Eval, from the beginning of the period of Jewish settlement, the period of Joshua. This is the altar, about which is written in the book of Joshua (see Scripture above), where it is told that Joshua builds an altar to G-d, the G-d of Israel, in Mount Eval. What makes the place a ritual site are findings such as tools that are identified as ritual objects, bones, and ashes that testify to animals having been sacrificed there. These are bones of animals that we are commanded in the Bible to sacrifice, yearlings of sheep and cattle."

Findings of bones consistent with the rules of Jewish sacrifice are not at all easy to find. This is mainly because the Canaanite neighbors and Philistines were careful to sacrifice pigs, and indeed bones of pigs are found in the ritual sites of Canaanites, Philistines, etc. On the other hand, in the altar on Mount Eval, there are almost no pig bones at all.

Raviv continues to describe the findings of Mount Eval. "There are also 'fingerprints' — these are tools from the period of the Judges, and on their handles and rims of the jars and pitchers you can see some holes that form a triangle, square, circle or line, something that has meaning in the ritual. This could be the sign of a family or the sign of the type of gift; research has various suggestions for what this might be. 'Fingerprints' were found on Mount Eval and Shiloh, which are Israeli ritual sites from the period of the Judges."

The findings of Mount Eval left those who are skeptical about Biblical archaeology without an answer.

Regarding the dating of the place as consistent with that of Joshua bin Nun, Raviv mentions the pottery shards and the scarabs (amulets) and the seals that were found there, which testify to its belonging to that period — the beginning of the era of settlement, the thirteenth century bce. "All of this, together with the fact that Mount Eval is known to us as the biblical Mount Eval, makes this place something very exciting, with which you cannot argue."

Regarding those who deny the Biblical link of the findings, when faced with the findings in Mount Eval, the claims of many of the archaeological historians were thwarted, even the toughest of them.