Ten Websites About the Holocaust 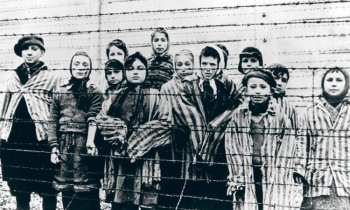 Holocaust Remembrance Day (Yom Hashoah) is a national day of commemoration in Israel. It is a time that the nation literally stops and remembers the six million Jews who were brutally murdered in the Holocaust. The ten websites below focus on the Holocaust. Some of them tell the history of what happened, others give the names of those who died and others provide documents, pictures, and other information.

Warning: It should go without saying that many of these sites have pictures and information that are shocking and horrifying. But the truth is they should be shocking to us. And we should see them, so that we can understand what man is capable of doing: "and Yahweh said to Himself: ...the devisings of man's mind are evil from his youth" (Genesis 8.21). It is important to remember that the Holocaust was not the work of just one nation. Every other nation knew what was happening and stood by and made excuses for not doing anything. The United States refused to drop one bomb — just one bomb — on the gas chambers and ovens of Birkenau, even though it was on the route that the bombers were flying. The US stated they could not spare the bomb. By ignoring the situation, or refusing to allow Jews to immigrate, each country participated in its own way, either directly or indirectly. All the governments of the world were fully aware of what was going on in the death camps.

Yad Vashem
As the Jewish people's living memorial to the Holocaust, Yad Vashem safeguards the memory of the past and imparts its meaning for future generations. Established in 1953 as the world center for documentation, research, education and commemoration of the Holocaust, Yad Vashem is today a dynamic and vital place of intergenerational and international encounter. If you visit Israel, this is one place you must visit.
The Tragic Voyage of the SS St. Louis
In May 1939, the SS St. Louis, a ship of 937 Jewish refugees fleeing Nazi persecution left Hamburg, bound for Havana, Cuba. When Cuba refused them entry, they turned to the United States but to no avail. US President Roosevelt allowed his anti-sematic US State Department to refuse them entry into the US, forcing them to return to Europe where two-thirds of the passengers were murdered in the Holocaust. This video tells their story.
Memory of the Camps | The Holocaust Documentary that Traumatized Alfred Hitchcock and Remained Unseen for 40 Years
Alfred Hitchcock was asked to assemble the footage shot at the liberation of the Bergen-Belsen concentration camp in 1945. One of Hitchcock's prime concerns was to emphasize the proximity of the camps to German towns in order to assert that ordinary Germans, "must have known about it." But the resulting documentary was ultimately held back. It was finally released in the mid-80s, in a film called "Memory of the Camps". Until that time, the original footage sat unused in storage at the Imperial War Museum.
The Jewish Virtual Library
This is the Holocaust wing of the Jewish Virtual Library Web site. It contains articles, original documents, a Holocaust glossary, a bibliography, and much more.
The Ghetto Fighters' House
This museum was founded in 1949 by a community of Holocaust survivors, members of the Jewish underground in the ghettos of Poland, and veterans of partisan units, to be a place of testimony that would tell the story of the Jewish people in the 20th century in general, and during the Second World War in particular. At the center of this chronicle are the manifestations of Jewish resistance: the organized uprisings of Jews in the ghettos and camps, and the Jews who fought in partisan units and the armies of the Allied forces.
Holocaust Pictures Exhibition
This site includes actual pictures taken during and after the Holocaust.
The Jewish Museum of Deportation and Resistance
This place was the departure point for a deportation without return. In the years between 1942 and 1944, 24,916 Jews and 351 gypsies were transported to the death camps in the east. Two thirds were gassed upon arrival. At the time of the liberation only 1,221 people had survived. This place was therefore, literally, "the waiting room for death". The underlying theme of the museum is to cover this dark period in the history of the Jews.
remember.org | The Cybrary of the Holocaust
This site contains Holocaust history and stories from Holocaust photos, survivors, liberators, books and art.
Holocaust: The Untold Story
This History Channel documentary takes a look at the lack of press coverage in the United States and the myth that the Holocaust was a secret.
A Teacher's Guide to the Holocaust
The content of this site is presented from three perspectives: Timeline, People, and The Arts. This guide is meant to be used as a resource by teachers.