The stabbings continue and terror grows daily and yes, the Jew shouts "Shema Yisrael" when he sees death before him.

[Note: Orthodox Jews usually write "G‑d" or "L‑rd" with a dash in an effort to not desecrate His name. The following article was written by an Orthodox rabbi. In order to preserve his writings, I have not changed that format.] 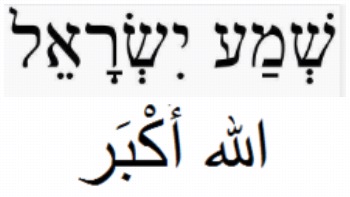 Nowhere was it more clearly seen. The real meaning of the struggle in the Holy Land was never more blatantly revealed than in the stabbing of a Jew in Jerusalem, recently. And now is it important for us to understand this reality, for if we do not we will not have the slightest idea of what the struggle in Israel is all about and, far worse, how to win it.

Yehuda Avahami, a young man who prays daily at the Western Wall, was walking last week through the so-called Muslim Quarter of the Old City of Jerusalem. Just inside Sha'ar Shchem (Damascus Gate) he was attacked by an Arab who stabbed him in the back. And here is the crux of the story: As the Arab stabbed the Jew, the Arab shouted in triumph, "Allahu Akbar!" ("Allah is great" [Actually, "Allah is greater"—ed]). The Jew, attacked and feeling that he was in danger of death, shouted, "Shema Yisrael!"

It has become the slogan, the war call, the triumphant shout of every Moslem attack on Jews. Allahu Akbar! The Arab who drove the Tel Aviv-Jerusalem bus over the cliff, shouted it. The Arab who attacked my nephew-soldier on the streets of Jerusalem, shouted it. It is the theme of the struggle of the Moslems against the Jewish state. And it is the theme of attack, of power, of defeating the Jewish enemy, of defeating the G‑d of the Jews, of triumph for Islam. Allahu Akbar! is the voice of the Moslem attacking the Jewish victim.

And the victim? He cries out, Shema Yisrael...

Shema Yisrael becomes the symbol of the victim, of the Jew attacked, of the dying Jew. The great concept of Shema Yisrael, which was meant to be the triumphant and powerful and resounding cry of the Jewish victory and the Omnipotence of the G‑d of the Jews, becomes a thin, small, quiet voice in the desert. The voice of Kiddush Hashem, Jewish sanctification, becomes one of degradation, of Jewish defeat and death.

And that is Hillul Hashem, desecration of the Name, and that worst of Jewish crimes dare not be allowed to continue lest His awesome wrath rage against us.

"Shema Yisrael!" Hear O Israel! This is the way the mashuach milchama, the priest who was ordained as the one who led the Jews into battle, would begin his speech to the Jewish army, prepared to go into battle:

"Shema Yisrael! Hear O Israel! You are coming near this day to the battle against your enemies. Let your heart not be faint; do not be afraid, do not panic, and do not be broken before them. For the L‑rd, your G‑d, is the One who goes with you, to fight for you against your enemies, to save you." (Deuteronomy 20.3-4)

Shema Yisrael is not the plaintive cry of a Jewish victim, but the clarion call of the mashuach milchama, the appointed Priest of War. It is not a numbing prayer of defeat but a certain, assured call of triumph. Not the voice of the victim but the roar of the conqueror. It is the affirmation of the real meaning of Shema Yisrael: "Hear O Israel, the L‑rd is our G‑d, the L‑rd is One - the only One, the all-powerful One, the all-conquering One, the One who is over all gods, including Allah."

Shema Yisrael is the voice of the Jewish Warrior-Priest to the Jewish warriors, not to the Jewish victims. It is the affirmation of the power and Omnipotence of the Jewish G‑d and the assurance that faith in Him guarantees victory. In the words of the Talmud (Sotah 42a): "Why does the message begin with the words 'Shema Yisrael', in particular? Rabbi Yochanan said in the name of Rabbi Shimon Bar-Yochai: the All Mighty said to Israel: even though you only observed the mitzvah of 'Shema Yisrael' in the morning and in the evening, you will not be given over to your enemies."

You think that is an easy thing, Jew? Think again.

Shema Yisrael is the symbol, the utterance of real faith. Real faith. Not the plastic faith of theory in which the Jew pays copious and very "frum", pious, lip service to the All Mighty, only to find a hundred "halachic" reasons why to back away from confrontation with the enemy at the moment of reality. Faith means believing the cry of the mashuach milchama whose Shema Yisrael is an integral part of, "Let your heart not be faint ... do not be afraid!" And in the words of the Sifri (Shoftim 192): "They come with the victory of flesh and blood, and you come with the victory of the All Mighty". And the Talmud, Sotah (ibid.), expands on this: "The Philistines came with the victory of Goliath; what was his end? In the end he fell with the sword and they fell with him, and you are not that way. For the L‑rd, your G‑d, is the One who goes with you, to fight for you...."

We have taken a Shema Yisrael that was meant to be the slogan of Jewish power and Omnipotence of our G‑d, and turned it into a plaintive cry of a victim. We took a cry of power and turned it into weakness. "Kol ha'Shem ba'koach! The voice of the L‑rd is powerful!" (Psalms 29:4). And if that is true, so must the voice of His people be powerful. "Who is the King of glory? The L‑rd, strong and mighty, the L‑rd, mighty in battle" (ibid., 24:8). And if that is true, then we must crown Him king in battle by our being strong and mighty in battle.

The reason that the Moslem shouts Allahu Akbar is because we allow him to think so. On that glorious day in 1967 when Jewish troops, the Tzivot Ha'Shem, the host and ranks of the All Mighty, swept into the Old City of Jerusalem and the Temple Mount, there were no shouts of Allahu Akbar. There was only fear and terror in the eyes and hearts of the Moslems who saw, and felt and knew — "Shema Yisrael, Hashem Echad!"

It was the Jewish retreat and fear of the world, of the nations, that reinstilled in the heart of the Moslem the belief that Allahu Akbar. It was the terrible lack of faith in the words of the priest of battle, "Do not be afraid.... for the L‑rd is the One who goes with you, to fight for you," that brought on us this terrible resurgence in faith and strength and arrogance of the Moslem. In direct proportion to Jewish lack of faith and fearful prostration before the Gentiles did the Moslems grow in certainty and confidence in Allah. What a terrible indictment of the Jewish people! What a terrible humiliation that Jews, the small and the great, talk about "the prohibition of antagonizing the nations." As if we were still in Pinsk or Casablanca.

And so a Moslem proudly attacks a Jew and cries, Allahu Akbar, and the Jew, in fear, cries out: Shema Yisrael. Not as a war cry but as a death chant. Hillul Hashem! [Desecration of the Name [of God])]

[Note: The original spelling in the article of 'Shma' has been replaced here with 'Shema' for easier reference on the Web. Some emphasis and links have been added.—ed]