Passover in a Union Camp 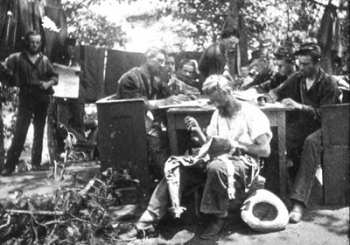 Union Infantryman — Life In Camp IX
The approaching Feast of Passover reminds me of an incident which transpired in 1862, and which as an index of the times, no doubt, will prove interesting to your readers. In the war of 1861, I enlisted from Cleveland, Ohio, in the Union cause and was attached to the 23rd Regiment from Ohio. Our destination was West Virginia, a portion of the wildest and most mountainous region.

Being apprised of the approaching feast of Passover, twenty of my comrades and co-religionists belonging to the Regiment united in a request to our commanding officer for relief from duty, in order that we might keep the holidays, which he readily acceded to. The first point was gained and, as the Paymaster had lately visited the Regiment he had left us plenty of greenbacks. Our next business was to find some suitable person to proceed to Cincinnati, Ohio to buy matzos. Our sutler (camp follower or civilian supplier to the troops) being a co-religionist and going home to that city, readily undertook to send them.

We were anxiously awaiting to receive our matzos and about the middle of the morning of Erev Pesah (Passover eve), a supply train arrived in camp and, to our delight, seven barrels of matzos. On opening them, we were surprised and pleased to find that our thoughtful sutler had enclosed two haggadahs and prayer books. We were now able to keep the seder nights, if only we could retain the other requisites for that occasion. We held a consultation and decided to send parties to forage in the country, while a party stayed to build a log hut for the services.

About the middle of the afternoon, the foragers arrived, having been quite successful. We obtained two kegs of cider, a lamb, several chickens and some eggs. Horseradish or parsley we could not obtain, but in lieu we found a weed, whose bitterness, I apprehend, exceeded anything our forefathers "enjoyed." We were still in a great quandary: we had the lamb, but did not what part was to represent it at the table, but Yankee ingenuity prevailed, and it was decided to cook the whole and put it on the table; then we could dine off it, and be sure we had the right part. The necessaries of the haroses (paste made of apples and nuts that looks like bricks and mortar) we could not obtain, so we got a brick which, rather hard to digest, reminded us, by looking at it, for what purpose it was intended.

At dark we had all prepared, and were ready to commence the service. There being no hassan (cantor) present, I was selected to read the service, which I commenced by asking the blessing of the Almighty on the food before us, and to preserve our lives from danger. The ceremonies were passing off very nicely, until we arrived at the part where the bitter herb was to be taken. We all had a large portion of the herb ready to eat at the moment I said the blessing. Each ate his portion, when horrors! what a scene ensued in our little congregation it is impossible for my pen to describe. The herb was very bitter and fiery like cayenne pepper, and excited our thirst to such a degree that we forgot the law authorizing us to drink only four cups and the consequence was that we drank up all the cider. Those that drank more freely became excited and one thought he was Moses, another Aaron and one had the audacity to call himself a pharaoh. The consequence was skirmish, with nobody hurt — only Moses, Aaron and Pharaoh had to be carried to camp and there left in the arms of Morpheus. This slight incident did not take away our appetite and, after doing justice to our lamb, chickens and eggs, we resumed the second portion of the service without anything occurring worthy of note.

There, in the wild woods of West Virginia, away from home and friends, we consecrated and offered up to the ever-loving God of Israel our prayers and sacrifice. I doubt whether the spirits of our forefathers, had they been looking down on us, standing there with our arms by our side ready for an attack, faithful to our God and our cause, would have imagined themselves amongst mortals enacting this commemoration of the scene that transpired in Egypt.