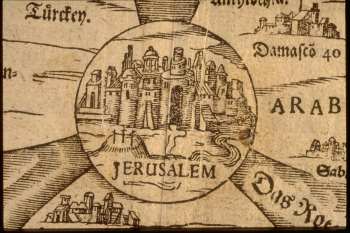 On November 29, 1947 the General Assembly of the United Nations passed a resolution that forever changed the status of Jerusalem in relation to its position in the world. Resolution 181 [II] was passed with hardly any notice, yet the full effect of this resolution is staggering!

This resolution established Jerusalem as a "corpus separatum". This is a legal term meaning a "body of separate covenant". In passing this resolution the United Nations (UN) declared that it has one covenant with Jerusalem (Resolution 181 [II]) and one with the rest of the world (the UN Charter). Israel as a country is to abide by the UN Charter. In the eyes of the UN, Jerusalem is seen as one entity (or body) and the world as another. This happened six months before the declaration of the State of Israel! It is important to understand that this has never happened before in history. No city has ever been set aside by a human government so as to abide by different laws than the rest of the world. The goal of the UN is to establish an "international regime" for Jerusalem (Resolution 194 [III] - December 11, 1948) to be created by the Trusteeship Council. This is a council of the UN that has been delegated full authority over Jerusalem. It is interesting to note that the five members of the Trusteeship Council are the same as the five permanent members of the Security Council. On April 4, 1950 the Council passed the "Statute of City of Jerusalem". This statute sets forth the guidelines and regulations for the ruling of Jerusalem by the "international regime". For reasons known only to the Lord, this statute has not yet been enforced.

Israel adopted its "Basic Law: Jerusalem" in August of 1980. To those who would question Israel's jurisdiction over its capital city, the "Basic Law" serves as a reiteration of the basic facts concerning Jerusalem and Israel's intention of maintaining their right to it. It was introduced into the Knesset in May of that same year.

On June 30, 1980, the UN Security Council (the only UN body with authority to enforce the resolutions) passed Resolution 476 [1980] by a vote of 14-0 with one abstention — the United States. It stated that it was "gravely concerned about the legislative steps initiated in the Israeli Knesset". The resolution is a general denial of Israel's right to Jerusalem and "urgently calls on Israel, the occupying Power, to abide by the present and previous Security Council resolutions..." The interesting element of this resolution is that it is based on a letter from the "representative of Pakistan, the current Chairman of the Organization of the Islamic Conference".

Later that same year, on August 20, the Security Council passed Resolution 478 [1980]. The vote, again, was 14-0 with one abstention - the United States. This resolution censured "in the strongest terms" the enactment by Israel of the "Basic Law" on Jerusalem. It stated that the enactment of the "Basic Law" constituted a violation of international law. The resolution also affirms the position of the Palestinians as "Civilian Persons in Time of War" as set forth in the Geneva Convention of August 12, 1949. Israel is seen as the "occupying Power" in the Land. Resolution 478 [1980] has been "repeated" by the General Assembly every year from 1981 up to, and including, 1987:

Jerusalem is the most contested and sought after city in all of history. Many nations and peoples have come against it: Assyrians, Egyptians, Babylonians, Greeks, Romans, Byzantines, Persians, Arabs, Crusaders, Mamelukes, Turks, Britons, and Jordanians. If this were only a physical battle, it would be hard to understand the reasoning behind this. However, the heart of the battle is spiritual. Yahweh has declared that Jerusalem shall be His Throne (Zechariah 8:3). His has proclaimed that He will reign in Jerusalem forever. In rebuking Satan, the Lord even mentioned that He had chosen it: "Yahweh said to Satan, 'Yahweh rebuke you, Satan! Indeed, Yahweh who has chosen Jerusalem rebuke you!'" (Zechariah 3:2). When the Lord was moving Israel into the Land from Egypt, it was Amalek who attacked the women and children, striking from the rear (Exodus 17:8-16). Seeing the true spiritual battle, Moses stated that there was "... a hand on the throne of Yah" (direct translation from the Hebrew Scriptures).

In 70 ce, Titus destroyed the Second Temple and all of Jerusalem. The Jewish remnant was driven into all the nations. On the morning of June 7, 1967, Jerusalem was retaken by Israel. However, there is still one part of Jerusalem that is not completely under Israeli control: Har Hakodesh (the Holy Mountain). For reasons known only to him, Yahweh, and Satan, Moshe Dayan (Minister of Defense at that time) allowed Moslem authorities to retain authority over this area. The prince of Islam has defiled this most holy place with a satanic veil as a covering over the entire mountain. However, Yahweh has declared He will remove this covering: "And on this mountain He will swallow up the covering which is over all peoples, even the veil which is stretched over all nations" (Isaiah 25:7).

Jerusalem truly is a "corpus separatum". However, it is set aside by Yahweh, not by the United Nations. He declares, "Behold, I am going to made Jerusalem a cup that causes reeling to all the peoples around" (Zechariah 12:2). He also said that He would put hooks in the mouths of all the nations and draw them into war against Israel (Ezekiel 38:4). The nations are beginning to gather against Israel, specifically Jerusalem. It is only a matter of time before the UN resolutions are enforced. All of the actions currently being taken by the UN are only preparations for the final conflict with Israel.