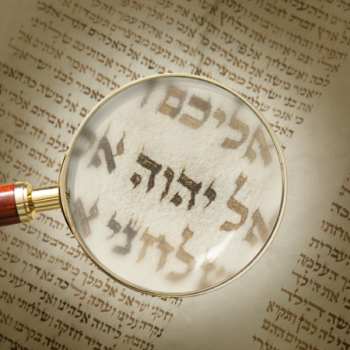 Viewing the true name of God through a magnifying glass.
In any attempt to understand the Bible, there is no substitute for a knowledge of ancient Jewish custom and practice. For example, the term Jehovah, which is found in many Christian translations of the Bible, originated because of a lack of awareness of Jewish custom.

In Hebrew Scripture the personal name of God is written with four Hebrew letters — yod, heh, vav, heh (YHWH)[1] — and therefore called the tetragrammaton. This name appears 6,829 times in the Hebrew Scriptures.

By linguistic comparisons with other ancient Semitic languages, scholars can be almost certain that the divine name was originally pronounced yahWEH. The pronunciation of the first syllable of the tetragrammaton is confirmed by the abbreviated form of God's name yah (transcribed Jah in the King James Version), which is sometimes used in biblical poetry (Ps. 68:4). It is also confirmed by the yah that is attached as a suffix to many Hebrew names such as 'eliyah (Elijah) and 'ovadyah (Obadiah).

In the First Temple period, at least until the Babylonian Exile in 586 bc, the divine name was regularly pronounced in daily life.[2] By the third century bc, although the tetragrammaton was pronounced by priests in certain Temple liturgies,[3] Jews avoided its use, employing instead many other substitutes such as hamakom (the Place), hagavoah (the High), halashon (the Tongue), hag'vurah (the Power; compare Luke 22:69) and shamayim (Heaven). When reading or reciting Scripture, the custom was to substitute 'adonai (LORD, literally, "my lords") for the tetragrammaton, or to substitute 'elohim when the tetragrammaton happened to appear together with 'adonai.[4] Even the less distinctive 'elohim (God), which also could mean "false gods," was avoided in conversation.

The reticence to pronounce the divine name was due to a literal interpretation of the third commandment (Exodus 20:7; Deuteronomy 5:11): "You shall not take the name of YHWH your God in vain." Although its original meaning was probably that one must keep one's vow when swearing by God's name, it was soon taken to mean that one should not use the sacred name frivolously or irreverently, and therefore to avoid the risk of violating this commandment it simply was not used in conversation. The pronunciation of the divine name was still known to all in the time of Jesus, however some substitute was always used to avoid uttering it. This tradition continues until today, even among many secular Jews. The more orthodox even say 'elokim in order to avoid saying 'elohim, and English-speaking Jews often write G-d instead of God.[5]

Until the early Middle Ages, Hebrew was written without vowels. As the knowledge of Hebrew declined, it became increasingly difficult for each generation to remember the pronunciation of words in the biblical text. By the sixth century ad there were relatively few native Hebrew speakers left, and most Jews had only a passive knowledge of Hebrew. It was then that a system of vowel signs was developed by the Masoretes, the Jewish scholars of the period, to aid the reader in pronunciation.

The Masoretes used the vowel signs they had created to vocalize the text of the Hebrew Bible, which until then had been composed solely of consonants. In accordance with the custom observed since the third century bc when reading or reciting Scripture, they superimposed the vowel signs of the word 'adonai upon the four consonants of God's name. This was to remind the reader that he should not attempt to pronounce the unutterable name. Thus yhwh would be read as 'adonai.[6]

When Christian scholars in Europe first began to study Hebrew, they misunderstood this warning device. Sometimes lacking even the most elementary knowledge of Jewish culture and custom, their blunder was inevitable. In 1518 ad in his De arcanis catholicae veritatis, a monumental work of Christian mysticism, the Italian theologian and Franciscan friar Galatinus, not realizing that the Masoretes had placed the vowel signs of another word with the consonants yhwh, fused the vowels of 'adonai with the consonants of the divine name[7] and thus gave the Church Jehovah, a word which has no meaning in Hebrew. The first consonant of the word, the "y" sound, was transliterated by "j" in Latin, and the third consonant, the "w" sound, by "v."

I believe that as Christians we should be sensitive to this ancient Jewish tradition. Although we may feel that Jewish exegetes of old were too pedantic in their interpretation of the third commandment, we must remember that Jesus himself apparently always avoided the use of the divine name by employing substitutes such as "Heaven" and "Power." Certainly we should not create new names for God such as Jehovah out of our ignorance of Jewish conventions.

To our embarrassment, we continue to perpetuate this error in Christian books, hymns, songs and translations of the Bible. The American Standard Version and The Living Bible use Jehovah for yhwh throughout, while translations such as the King James Version, New English Bible, and New Berkeley Version use Jehovah only occasionally. The non-word Jehovah would be simply an amusing mistake if it did not illustrate so vividly Christians' continuing lack of understanding of Hebrew language and Jewish practice.

1. At the time when the Hebrew Bible was being composed, the vav, the third letter of the tetragrammaton, was pronounced as a "w" rather than a "v" as in modern Hebrew. [return]

4. If the tetragrammaton happened to appear in the biblical text either before or after the word 'adonai, then the Masoretes superimposed the vowels of 'elohim (God) upon the tetragrammaton — YHWH (to be read 'elohim). Thus these two combinations, 'adonai YHWH and YHWH 'adonai, were pronounced 'adonai 'elohim and 'elohim 'adonai, respectively. In English translations of the Bible they are usually translated as "Lord GOD." and "GOD, the Lord". [return]

5. Each letter in the Hebrew alphabet has a numerical value (see "Hebrew Nuggets, Lesson Seventeen: vav," Jerusalem Perspective 17 [February 1989], 3), and Hebrew letters are used to cite verses and chapters of the Bible. However, the two combinations yod-heh (10+5=15) and yod-vav (10+6=16) are replaced in Bible texts by tet-vav (9+6=15) and tet-zayin (9+7=16), respectively, so as to prevent the possibility of God's name being taken in vain by reading the number yod-heh as yah or the number yod-vav as yo (which like yah is a theophoric designation). [return]

6. There is one small difference between the vowels of 'adonai and those of the tetragrammaton. The Masoretes altered the "ah" vowel of the first syllable so that readers would not see "yah" and inadvertently blurt out the unutterable name. [return]