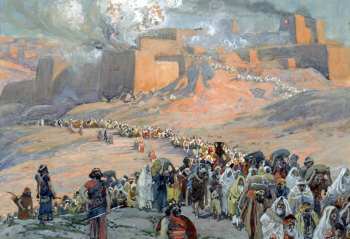 Dispersion of the Jews


Cyrus, king of Persia, issued a decree in 539 bce to rebuild the Temple in Jerusalem (Ezra 1.1-4). Many people believe that this regathering of a Jewish remnant to the land of Israel was prophesied in Scripture. If that's true, how does it relate to what Yahweh has stated in Scripture? If it wasn't the regathering, then what was it?

When Yahweh speaks of the regathering of the nation of Israel, it's always a permanent return (Jeremiah 30:8; 32:40-41; Ezekiel 39:25-29). He never intended to leave any part of Jacob in the midst of the nations. Jeremiah wrote,

"Thus says Yahweh, God of Israel, 'Like these good figs, so I will regard as good the captives of Judah, whom I have sent out of this place into the land of the Chaldeans. For I will set My eyes on them for good, and I will bring them again to this land; and I will build them up and not overthrow them, and I will plant them and not pluck them up'" (Jeremiah 24:5-6.)

Notice what Yahweh has said regarding this regathering: "not overthrow them" and "not pluck them up". This cannot apply to the regathering in 539 bce because the Romans overthrew them several hundred years later. Let's look at Zechariah 8:7-8:

The significance of this prophecy lies in the fact that Zechariah wrote it in the land of Israel after his return following the decree of Cyrus. If they had already been regathered for the last time, why would Zechariah prophesy that it would happen later, as if it hadn't yet happened?

There's another problem with the "regathering" in 539 bce. Jeremiah stated that Jerusalem "shall not be plucked up, or overthrown anymore forever" (Jeremiah 31:38-40). Titus overthrew Jerusalem in 70 ce; therefore this prophecy, along with others like it, must refer to a different regathering — a more permanent one.

There are Scriptural references to a second regathering, among others:

"Then Yahweh your God will restore you from captivity, and have compassion on you, and will gather you again from all the peoples where Yahweh your God has scattered you" (Deuteronomy 30:3)

"Then it will happen on that day that the Lord will again recover the second time with His hand the remnant of His people, who will remain, from Assyria, Egypt, Pathros, Cush, Elam, Shinar, Hamath, and from the islands of the sea" (Isaiah 11:11).

These prophecies are significant because they refer to a second regathering to the Land — the final regathering spoken of by the prophets.

If the return in 539 bce was not the regathering that many believe it to be — then what was it? Perhaps this was the return spoken of by Jeremiah (29:10): "For thus says Yahweh, 'When seventy years have been completed for Babylon, I will visit you and fulfill My good word to you, to bring you back to this place.'"

After Ezra had returned to Jerusalem, the princes discovered that the people of Israel, along with the Levities and priests, had not separated themselves from the people of the surrounding nations. They had taken for their wives the daughters of the Canaanites, the Hittites, the Perizzites, the Jebusites, the Ammonites, the Moabites, the Egyptians, and the Amorites (Ezra 9:1). When Ezra heard of this situation, it grieved him in his spirit and he sought the face of Yahweh. In praying, Ezra confessed the sins of Israel that had brought them to this situation. Then, in the midst of his prayer, Ezra reveals the reason for the regathering — to give Israel hope in the midst of the Diaspora. Ezra prayed:

"But now for a brief moment grace has been shown from Yahweh our God, to leave us an escaped remnant and to give us a peg in His holy place, that our God may enlighten our eyes and grant us a little reviving in our bondage. For we are slaves; yet in our bondage, our God has not forsaken us, but has extended lovingkindness to us in the sight of the kings of Persia, to give us reviving to raise up the house of our God, to restore its ruins, and to give us a wall in Judah and Jerusalem" (Ezra 9:8-9)

These two sentences are very revealing. First, Ezra states that the return from Babylon will be "for a brief moment". This is not the permanent regathering stated by the prophets. Had it been, Ezra would surely have given glory to Yahweh for their regathering to the Land. He would also most likely have spoken of their return to the Land forever. Next, we see that Ezra still considers them in bondage to the Persians: "grant us a little reviving in our bondage. For we are slaves; yet in our bondage". Finally, we see the reason for the return: "to leave us an escaped remnant and to give us a peg in His holy place ... to raise up the house of our God, to restore its ruins, and to give us a wall in Judah and Jerusalem". There had never been any judgement in the history of the world like the one that Israel had experienced. Any other time a nation has been torn from its land, it has never returned. Yahweh wanted Israel to know that He would regather them according to His promises. He wanted them to know that the house of God was in Jerusalem and that He had rebuilt Jerusalem, the city of the great king. In the Diaspora, Israel would remember what Yahweh had said regarding His house, His mountain, and Jerusalem, His holy city.

Jeremiah prophesied that Israel would return after seventy years (Jeremiah 29:10). How, then, can we reconcile this with what we have already seen? To understand this, we must carefully read what Jeremiah wrote. He stated, "For thus says Yahweh, 'When seventy years have been completed for Babylon, I will visit you and fulfill My good word to you, to bring you back to this place'" (29:10). Notice that Yahweh stated "this place". It's assumed that He meant the land of Israel, but then why did He not say "Israel" or "this land"? Instead He says "this place". Yahweh says "all you exiles, whom I have sent away from Jerusalem to Babylon" (29:20). Their going "back" to where He sent them from. If we look in the next verse, we see that Yahweh expresses the same reason for bringing them back as Ezra stated: "to give you a future and a hope" (29:11). Thus Yahweh declared that He would bring His people Israel back to the city of Jerusalem. Daniel, after reading the words of Jeremiah (Daniel 9:2), prays for Yahweh to turn His wrath "away from Thy city Jerusalem, Thy holy mountain" (Daniel 9:16). Jeremiah emphasizes a return to the city of Jerusalem; not necessarily the entire land of Israel.

In 70 ce the Jewish remnant in Israel returned to the Diaspora. Was this another dispersion? I don't believe so because most of the Jews had stayed in the Diaspora. Only a remnant had returned. The true regathering started in the late 1800's and culminated in 1948 with the rebirth of the nation of Israel in the Land of Israel. Am Yisrael chai!