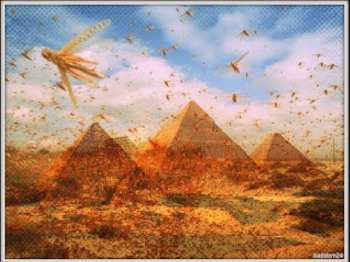 Plague of locusts in Egypt
Approximately 2 million children of Israel are now encamped in the Sinai following their extraordinary Exodus from Egypt yesterday.

Just days ago, they were slaves to Pharaoh. Today, they are free men and women, destined for self-determination in a land of their own.

Only now are the details of their fantastic experience coming to light. The dramatic sequence of events began some weeks ago with the unexpected return of exiled Prince Moses, who previously fled Pharaoh's wrath after slaying a taskmaster.

In his daring appearance at the palace, the inarticulate Moses, speaking through his brother Aaron, declared himself to be the personal emissary of a powerful new God, previously unknown to the royal court. Moreover, Moses asserted that his God was the protector of the children of Israel, who have for more than four centuries been in bondage in Egypt.

The royal court was aghast as Moses demanded that the children of Israel be permitted to travel three days into the desert for an unprecedented "feast and sacrifice" to their God.

Moses looked straight at Pharaoh, stamped his roughhewn staff and issued the ultimatum that would be his rallying call during the coming days: "Let my people go." Laughter echoed throughout the hall as Pharaoh sneered, "Who is your 'God?' I know him not. Nor will I let Israel go!"

Moses then called upon mysterious divine powers and turned all the water in Egypt to blood. Bloody waters continued for about a week, followed by an uncanny infestation of frogs.

Amid complaints from every corner of the kingdom that frogs had invaded every "oven and bedchamber," Pharaoh agreed to negotiate. During a palace meeting, Pharaoh reportedly told Moses, "Take away the frogs ... and I will let your people go."

But as soon as the frogs retreated, Pharaoh reneged and canceled permission for the religious exercise in the desert.

Pharaoh's reversal prompted a third so-called "plague," this one an infestation of lice. Pharaoh finally yielded to the desert site, but with the strict proviso that the Israelites "not go very far away."

No sooner did the lice vanish, then permission for the desert ritual was again rescinded. Moses returned to the court and in quick succession brought plagues of livestock disease, boils and then hail.

So much destruction covered the land that Moses was summoned for an emergency round of negotiations. Without prolonged debate, Pharaoh declared, "I will let you go." But true to form, as soon as the hail stopped, Pharaoh reneged again.

Left with no choice, Moses called forth the locust invasion followed by an eerie round-the-clock darkness lasting three full days.

The details of what happened next are still sketchy. In Goshen, Israelites were observed painting their own doorways with lamb's blood. By nightfall, all Israelites were off the streets and in their homes.

At midnight precisely, an unexplained affliction began sweeping the Egyptians, while passing over the children of Israel. Health authorities claim that there was neither rhyme nor reason to the plague. But unconfirmed reports assert that it was always the eldest in each family generation to be stricken. This latest plague was the final blow. After just a few hours, it was clear that no family had been spared. Even Pharaoh lost a child.

Palace messengers were dispatched in the middle of the night. They finally located Moses and brought him to a predawn meeting with a humbled and beaten Pharaoh.

All demands were accepted. In a trembling voice, the once all-powerful monarch beseeched the slave leader with the simple words: "Be gone." There was no time to lose.

So speedy was their withdrawal that, as one Israelite described it, "the people took their dough before it was leavened."

But the ordeal of the Israelites was not over. Intelligence reports reaching Pharaoh quickly confirmed his worst suspicions.

Pharaoh openly conceded to one adviser, "What is this that we have done, that we have sent Israel away from serving us?" An angry Pharaoh then declared the Red Sea a "Line of Death" that he would not permit Israel to cross. An army of 600 chariots was immediately organized, with Pharaoh in the lead.

Faced with a total breakdown of morale and 600 deadly chariots, Moses beseeched his people, "Fear not ... God will fight for you."

A sudden, fierce sandstorm gripped the wadi separating the Egyptian charioteers and the fleeing Israelites. This effectively halted the Egyptian advance. Meanwhile, the same east wind that whipped up the sandstorm over the Egyptians also swept back waters of the Red Sea, thus revealing high ground.

Moses dramatically lifted his arms, pointing the way throughout the night as the 2 million Israelites hustled across. The fleeing slaves had barely reached the opposite shore when an advance unit of Egyptians found their way through the sandstorm.

They led the others, and suddenly the entire Egyptian force was racing at top speed toward the "Line of Death." Cries of terror filled the Israelite camp as they awaited their doom.

But then the same blistering sandstorm shifted to the seawaters. The lead charioteers were confounded, lost their way and quickly became mired in mud.

In a brilliant tactical move, Moses again raised his arms dramatically and pointed. Thinking this to be the way out, the Egyptians organized their comrades to flee in that direction.

Within moments, the flood waters overtook the chariots. Thousands of Egyptian charioteers and fighting men along with their horses were drowned. Royal search teams were unable to recover a single survivor.

The children of Israel were overwhelmed by the miraculous turn of events. They broke into songs thanking their God, vowing that they would "glorify God forever."