A Biblical History of Jerusalem 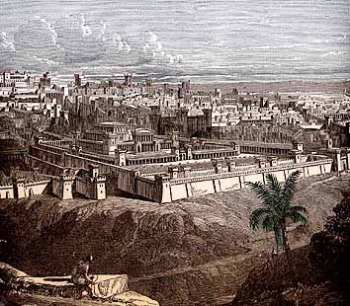 References to the city of Jerusalem appear throughout the entire Tanakh"1 (often incorrectly referred to as "the Old Testament"). Through the ages it has been called by many names: Salem, Mount Moriah, Adonai Urah, Jebus, Jerusalem, Zion, the City of David, and Ariel (Lion of God). Yahweh has declared that this is the place where He will establish His Name and will dwell there forever (1 Kings 9.3).

Jerusalem is a city rich in history, tradition and culture. It's also one of the main focal points of the United Nations and the world. This article will show the history of Jerusalem as it is presented in the Tanakh: without interpretation or speculation. The aspect of prophecy will not be addressed as this is not a part of the literal history of Jerusalem. To understand the periods of time, all dates are taken from known historical events, except in the time of Abraham.

The scriptural history of Jerusalem begins around 2110 bce after Abram defeated King Chedorlaomer of Elam and the kings with him, and rescued his nephew Lot. The king of Sodom went to meet Abram in the Valley of Shaveh (the Valley of the King). There King Melek Tzedek of Salem brought bread and wine to Abram and blessed him (Genesis 14.17-20).

Several years later (approx. 2082 bce), following a command from Yahweh, Abraham took Isaac, his only son by his wife Sarah, to Mount Moriah in order to offer him as a sacrifice to Yahweh (Genesis 22.1-18). As he was about to kill Isaac, Yahweh intervened and supernaturally provided a sacrifice in the place of Isaac. Abraham called that place, Yahweh Will See, of which it is said, "On the mount of Yahweh it will be seen" (Genesis 22.14). This is usually improperly interpreted as "the Lord will provide" or "the Lord who provides" since Yahweh provided a sacrifice in place of Isaac. However, there is actually two different statements there, which most people generally overlooked, and they each say something a bit different. By this we can see that Yahweh had already chosen Jerusalem as the place where He would establish His dwelling place. (The JPS version interprets the passage as On the mount of Yahweh there is vision.)

Around 1405 bce, "The sons of Judah fought against Jerusalem and captured it" (Judges 1.8). Most people think Jerusalem is located within the boundaries of the tribe of Judah but it is on the dividing line between Judah and Benjamin, on Benjamin's side. It is said that the sons of Benjamin could not drive out the Jebusites so they lived together (Judges 1.21).

King David conquered Jerusalem by defeating the Jebusites in 1052 bce (1 Chronicles 11.4-9). It is interesting to note that, in the middle of a war with the Philistines, David, upon being anointed king over Israel, turned to Jerusalem in order to take the city as capital of his kingdom. He ignored the Philistines until Jerusalem was secured and established. He reigned there thirty-three years and built Jerusalem into a great city.

David wanted to build a house for Yahweh, but Yahweh told him that He would establish for David, a house, a throne, and a kingdom forever (2 Samuel 7.1-17). But because of the blood on David's hands, Yahweh did not allow him to build the house (1 Chronicles 22.8). David, however, did make preparations for his son, Solomon, to build it (1 Chronicles 22.2-5, 14-16).

The adversary maneuvered David into taking a census of Israel (1 Chronicles 21). This would put David's trust in the size of his army, rather than Yahweh. Even Joab recognized this and tried to dissuade David from taking the census. Nevertheless, David prevailed and the census was taken. Yahweh was displeased and gave David a choice in his punishment: three years of famine, three months of attack by his enemies, or three days of pestilence in Israel. David, not wanting to feel the ruthlessness of man, told Yahweh he wanted to fall into His hands. So Yahweh sent a pestilence on Israel and 70,000 men died. Yahweh then sent a messenger to destroy Jerusalem. When the messenger was standing over the threshing floor of Ornan, the Jebusite, with his sword lifted to destroy Jerusalem, Yahweh stopped him. David, as well as Ornan, saw the messenger of Yahweh standing between heaven and earth with his sword drawn over Jerusalem. Davis asked Yahweh to stop His wrath against Israel as it was he who ordered the census, not the people of Israel. The messenger of Yahweh told David, through the prophet Gad, to build an altar to Yahweh on the threshing floor of Ornan. David bought the threshing floor from Ornan and built an altar on it. As the messenger of Yahweh put his sword back into his sheath, David offered a sacrifice to Yahweh on the altar. He then offered up burnt offerings as well as peace offerings. These were acceptable to Yahweh and He sent fire from heaven and consumed the burnt offering. David declared that "Here will be the House of Yahweh and here the altar of the burnt offerings for Israel" (1 Chronicles 22.1). The threshing floor of Ornan is located on the same place where Abraham took Isaac to be sacrificed — Mount Moriah. (Many people today believe that it is the same rock which sits under the Dome of the Rock on the Temple Mount in Jerusalem.)

However, because Solomon went after other gods due to the influence of his pagan wives, Yahweh turned His wrath against Solomon's kingdom, tearing it into two smaller kingdoms (1 Kings 11).

Jerusalem was the capital of Judah (the Southern Kingdom). It would end up being ruled by a succession of twenty kings from 979 bce to 586 bce. Their reigns lasted from as short as three months (Jehoahaz and Jehoiachim) to as long as fifty-five years (Manasseh). The bleak history of the decline of Judah is told in 1 Kings 12.1-2 Kings 25.30, and 2 Chronicles 10.1-36.21.

Eventually, Jerusalem was destroyed by King Nebuchadnezzar of Babylon in 586 bce. The city, as well as the Temple, was completely leveled and the articles of the Temple and its treasures were carried off to Babylon. The inhabitants that were not killed were also taken to Babylon. Jerusalem was to lie desolate for seventy years in order that the land might enjoy its Sabbaths (2 Chronicles 36.17-21/Leviticus 26.34).

The Rebuilding of Jerusalem

In 539 bce, Cyrus, king of Persia issued a proclamation to rebuild the house of the Lord in Jerusalem (Ezra 1.1-4). A total of 42,360 people returned to Jerusalem and Judah to help rebuild the Temple, not including male and female servants and the singers. All gave according to their ability, in order to finance the work.

In the first year, in the seventh month, Jeshua and Zerubbabel led a group to build the altar in order to offer sacrifices in accordance with Torah. During this time, they celebrated Sukkot (Feast of Tabernacles) and the other festivals of Yahweh.

After gathering all the materials, they began the work on the Temple in the second year, in the second month. It was finally completed in 516 bce, on the third day of the twelfth month — a total of twenty-three years.

Seventy-one years later (445 bce) Nehemiah heard of the condition of Jerusalem. He lived in Susa and was the cup-bearer of King Artaxerxes. Nehemiah asked King Artaxerxes to allow him to return to rebuild the city. The king granted his request and Nehemiah set out for Jerusalem. The account of the rebuilding, along with details regarding the opposition to the work, is given in the book of Nehemiah.

This is all that is given of the history of the city of Jerusalem, according to the Hebrew Scriptures.

It's plain to see that Jerusalem has played, and will continue to play, an important part in Yahweh's deliverance of the earth. It is plain enough that we should seek His guidance and direction concerning this, His Holy City, and our involvement in it.

1. Tanakh is an acronym from the initial letters of the Hebrew words Torah, meaning "teaching" or "instruction," Nevi'im, meaning "prophets," and Ketuvim, meaning "writings"). It makes up the body of writings known as the Hebrew Bible (often incorrectly referred to as "the Old Testament") [return]